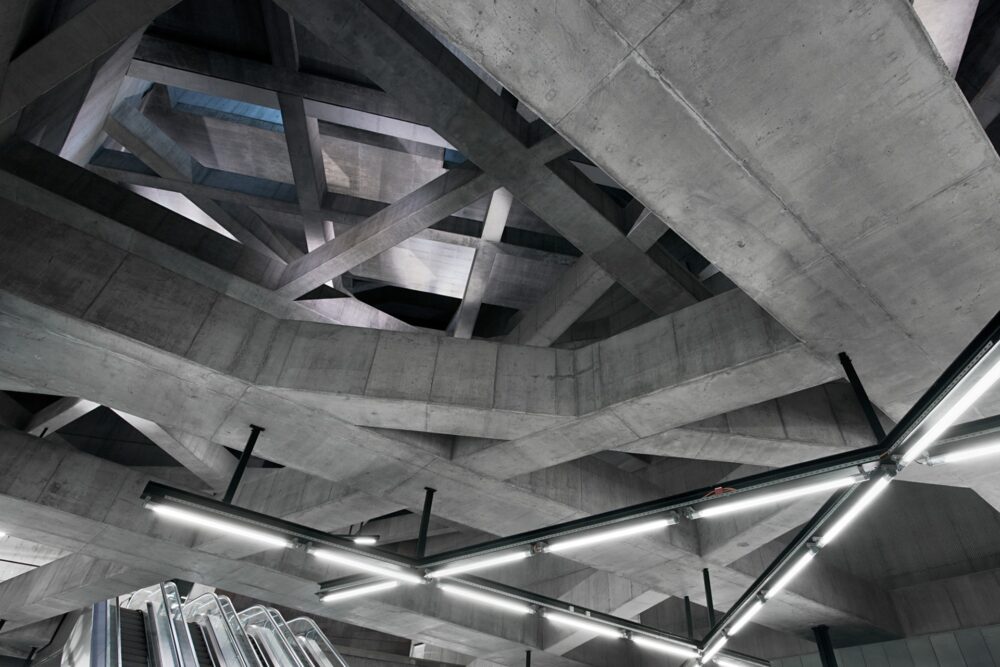 Posted at 13:40h in Uncategorized by Arne Hübner
Share

Budapest’s fourth metro line was originally intended to be open for traffic in 2008. The planning of the stations had already commenced in 2005, although the inauguration only took place ten years later. Now the most spectacular and multiple award-winning new city space has been accessible with only a metro ticket since 2014. Underground, the line crosses the Danube at this point. The confined area made access via escalators running parallel to the route impossible: the tram tunnel, the quayside, university buildings, and, of course, the nearby Danube meant that the descent into the underground begins parallel to the river and is diverted to the platform via an intermediate level. The two directions defined the parallelogram which the 30 m deep space has cut into the earth. Open spaces and natural light are features of all ten new stations, as is the dominance of fair-faced concrete. At Fővám tér and the station Széll Kálmán tér (designed by the same team), tremendous lateral earth pressure is absorbed by the reinforced concrete beams spanning four levels to form a frenzied, Mikado-like structure. The descent running parallel to the Danube leads directly through the tangle of gigantic beams which evoke fallen tree trunks. Vitreous volumes at ground plane allow daylight to reach the lowest platform level. The audacious ambience of this underground space therefore engages in fierce competition with Fővám tér.

Learn more on THIS tour!